Many people are afraid to take a cognitive test because they think they will “fail it.” This is unfortunate because they are no more likely to “fail it” than they are the tests of lung and arterial function. It’s like thinking that because you get a little shorter of breath running up a flight of stairs now than when you were younger, you are going to get lung cancer or have a heart attack.

As early as your mid-twenties, certain aspects of your cognitive function begin to decline in a linear fashion. You don’t notice the decline unless you tax the system, e.g., play a video game or do long division in your head. If that decline is steeper than the average person, you are more likely to have significant neurologic disease decades later than someone whose decline is average, and now is the time to act.

The CNS Vital Signs battery of neuropsychological tests assesses the main areas of cognitive function, by taxing them more than your daily activities (Most people find the 20-minute battery to be quite challenging). It is used to screen for significant neurologic impairment from dementia, ADHD, or medications and is a screening test that everyone should take periodically. Just as we saw with spirometry, however, in order to know if there is a significant impairment, the results of the test must be age-adjusted. While most domains of cognitive function are affected by normal brain aging, two areas are particularly sensitive to age and start early in adulthood.

These domains of cognitive function are called ‘reaction time,’ ‘psychomotor speed,’ and ‘processing speed.’ The Stroop Test measures how quickly and accurately you can apply a rule to a stimulus and then inhibit the application of that rule (first act when the word spells the color of its font/then reverse the rule). The Symbol Digit Coding test measures how many paired sets of symbols and digits you can process on a computer screen with your eyes and then press the corresponding key on the keyboard. Cognitive neuroscientists have shown that the decrease in performance on tests like these is correlated with the loss of dopamine activity in the frontal lobes of the brain.

Your NeuroAge is a weighted composite of the scores on these two tests. 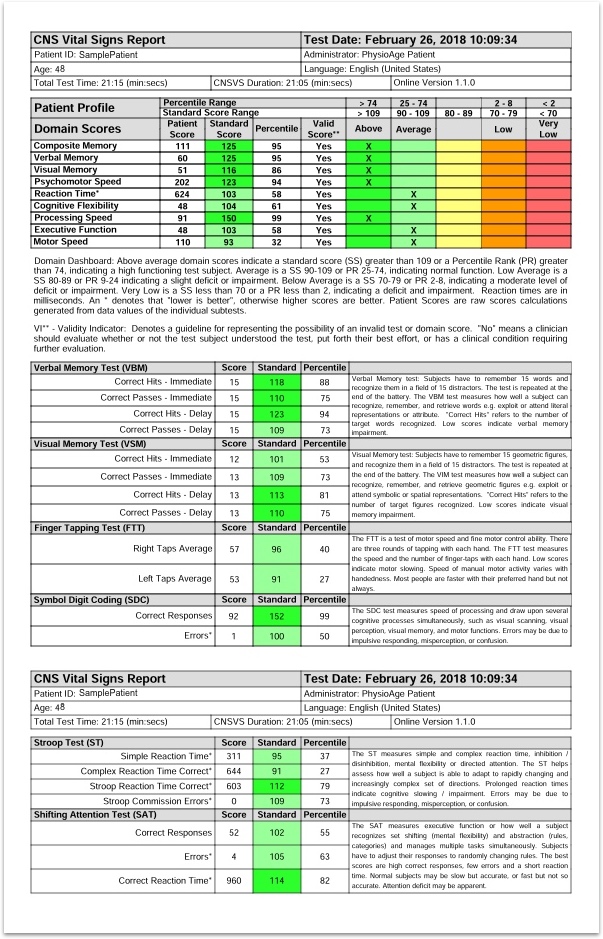