If there is a candidate to be considered the human body’s molecular clock, then one of the front runners must certainly be the length of our telomeres. From the Greek, telos, meaning ‘end,’ and mere, meaning ‘part,’ telomeres are the caps on the ends of each of our chromosomes that protect them from being mistaken for damaged DNA. They are composed of thousands of repetitions of the same sequence of 6 base pairs (the letters of DNA), TTAGGG. With each cell division, they shorten by about 50-100 base pairs because of the difficulty DNA polymerase has replicating one of the strands. At young adulthood, the mean lymphocyte telomere length (MTL) is about 8 kb (8,000 kilo base pairs). Once it reaches 4 kb, the cell no longer is able to divide and enters what is called ‘replicative senescence,’ in which it fails to perform its function and produces detrimental inflammatory molecules. The molecular clock stops ticking.

The subset of your white blood cells used to calculate your ImmunoAge, the lymphocytes, is the cell type whose telomere length has been most studied. This is mostly because of its easy access through a routine blood draw, in contrast to a biopsy of, for example, your lungs or arteries. Hundreds of studies have linked the shortening of lymphocyte MTL not only to the aging process, but also to cardiovascular disease, smoking, various cancers, and even psychological stress. (A few studies have measured the correlations between MTL and the telomere lengths of other tissues in the body and have found general agreement.)

The average person’s lymphocyte MTL decreases about 30-50 base pairs per year; you are more likely to be in the higher end of this range if you smoke, don’t exercise, have a lot of stress, or have a chronic disease. Thus, if you start out with a lymphocyte MTL of 8 kb and lose 0.04 kb/yr (40 base pairs), you will get to the critical length of 4 kb in 66 years, again, very close to the average human lifespan. The correlation with age for this biomarker is in the range of an r2 of 0.5.

You may be thinking, “If you telomere length functions as such a great biomarker of aging and disease, why don’t we just measure it instead of bothering with all these other tests?” We wondered about that too as we were searching for the best biomarkers of aging. To our amazement, we found that while telomere length correlates with age very well, the combination of biomarkers including it correlate much better—r2 0.8 versus 0.5—confirming the notion that the aging process is best understood by looking at combinations of biomarkers of important physiological systems. 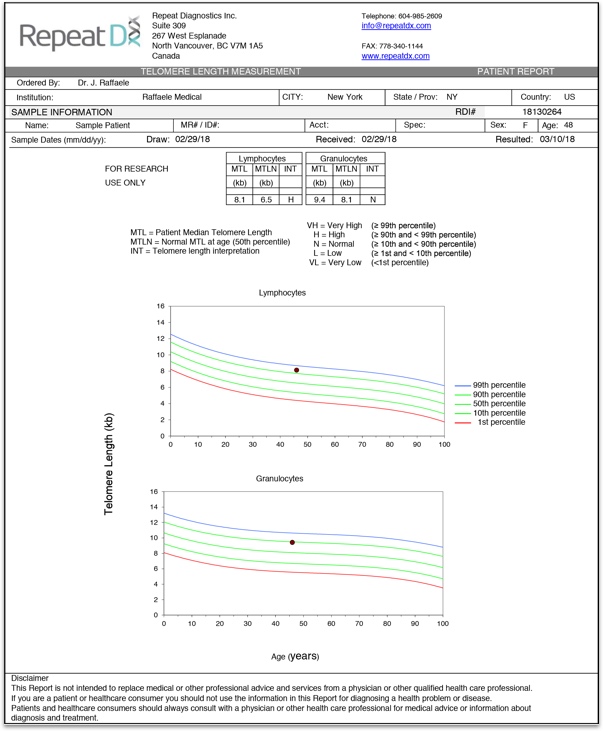